How Do Teeth Move During Orthodontic Braces?

The principle of orthodontic tooth movement is based on the fact that with the application of a force applied to a tooth, over an extended period of time, associated surrounding bone begins to change to facilitate tooth movement. This is achieved as the hard and soft tissues surrounding the tooth begin to balance the applied forces. The resulting tooth movement, which is mediated by the periodontal ligament, allows for the tooth to move through bone with the socket and attachment apparatus intact [1]. This process of movement within hard and soft tissues is achieved through the induction of biochemical signals, cellular processes, and signalling pathways; allowing for tissue remodelling, and ultimately facilitating tooth movement [2]. Further, areas of consideration in the orthodontic tooth movement process are the reactions occurring in mineralized (alveolar bone) and non-mineralized (PDL and gingiva) paradental tissues, and associated neurovascular networks [2]. 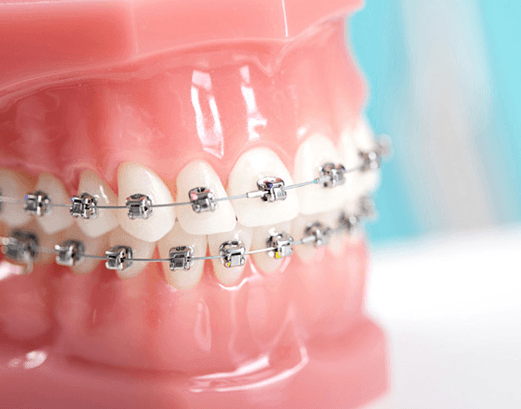 Signalling: Bone and the Ligament

The application of an external force to a tooth leads to many cellular changes of the surrounding extracellular fluid. An important cellular change which occurs is the expression of specific genes and the subsequent production of proteins which allows for the production of cellular messengers, and ultimately communication for the transfer of biochemical signals [2]. The mechanism of communication of the ligament to the surrounding tissues is thought to be controlled by the biological electricity, fluid-flow tissue and pressure-tension theories [1].

The bioelectric theory is based on the fact that from the force applied, resulting changes occur in bone metabolism, as electric signals are produced by the bending and distortion of bone under pressure [1].  Although a piece of the puzzle (the bioelectric theory); it has been found that stress-generated signals are more important for normal skeletal function, and have less influence on sustained force application remodelling, as in orthodontic movements [1].

A more pertinent hypothesis as described by Goulet et al 2008., is the fluid-flow mechanism which describes the resulting affects on bone, as mechanical forces cause strain, leading to a change in the fluid dynamics [3]. Furthermore, other chemical mediators, including hormonal factors are released which help regulate and control the activity of bone[4]; allowing for bone resportion in specific areas.

The pressure tension theory describes cellular changes and the production of chemical messengers, due to the creation of areas of pressure and tension, and thus altering blood flow dynamics in vessel networks associated with the PDL [1]. As a given force causes the tooth to move in the PDL space, areas of compression and tension are created; in the associated compressed areas blood flow is decreased, while it is usually increased in areas of tension [1]. The initial displacement of tooth and the PDL may occurs within seconds; however, true movement may take several hours as a wave of cellular activity and the release of chemical mediators is needed to instigate the remodelling process[1].

The final result of the three theories, is ability of an applied force to strain the extra-cellular matrix, bone, ligament, and associated tissues. As a result, there is an alteration in electrical signals and biochemical mediators, which affect cells of the alveolar bone (osteoblasts, osteoclasts, and osteocytes), ligament, fibroblasts, blood vessels and neural tissues [2]. Thus, as areas of compression and tension results in the PDL; osteoclasts then begin to remove bone on the side of compression, whilst osteoblasts begin to produce immature bone on the side of tension, and remodel affected bone [1]. Osteocytes are also a key member of this osteogenic process as their canaliculi networks facilitate communication with all surrounding alveolar bone [2]. This communication is vital, as osteoblasts maintain direct contact with osteocytes, responding to signals and begin the process of apposition, as required [2].